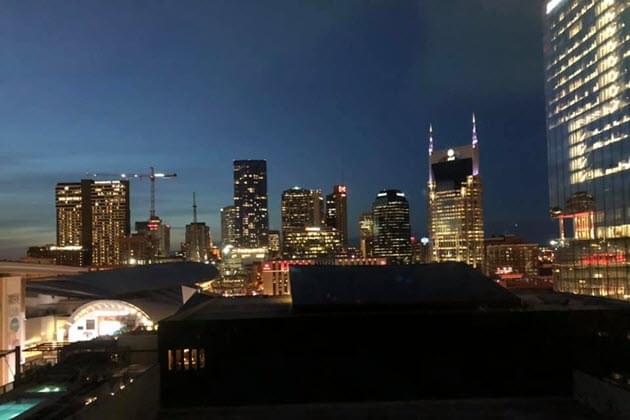 I still don’t have working use of my voice, which is SO FRUSTRATING because I have SO MUCH to tell you about my trip to Nashville! But I do have full use of my fingers, so I guess I’ll tell the story online until I can tell it on air!

There’s a lot to this story, so I think I’ll break it up into three different blogs!

First things first, Kristin, why did you go to Nashville?

Other than the fact that it’s a pretty awesome town and the hub of country music, I actually was awarded a scholarship to attend Country Radio Seminar (sometimes known as CRS).You may have heard Shawn and Elaina talking about it on Nash Nights Live, or Ty mentioning it on the Ty Bentli Show… and I saw ALL of them, there! Country Radio Seminar is the only Country music seminar in the country, it’s meant for those in country radio, musicians, labels, etc… basically anyone who does anything with the country music industry is invited! Like all industry seminars, there are panels, lunches, and entertainment… although when you’re in the country music industry, the Entertainment is top notch!

Seminars give you SO much info and can end up pretty pricey, so I’ve wanted to go to CRS SO many times but I couldn’t work it out financially, which is where this scholarship came in. The Rusty Walker Scholarship is awarded to three full-time country radio workers, who have never been to CRS before. Check, check, and CHECK! Rusty Walker was a radio consultant who loved helping up-and-comers in the business thrive, so it’s awarded to people the panel deem up-and-comers in the industry. But SO many people apply for this all across the country (and even Canada), and I’m not one to win things, so I submitted, and I was very thoughtful on my answer to WHY I should be the Rusty Walker Scholar (I even had our Market Manager look over it and give me tips on how to make it better), but I didn’t really expect anything from it. In fact, I had already made plans to take Thursday and Friday last week off to go back to my old station in Bloomington and help them out with St. Jude stuff. In November I got a call to congratulate me, I had been chosen!

So on Wednesday, I flew to Nashville, all expenses paid.

As I was hanging out in the terminal in Charlotte, NC for my layover, I thought “I really should have just driven the 6 1/2 hours to Nashville.” Yes, I went from Peoria, to Charlotte, NC, to Nashville. And I’m not a GREAT flier, so even though I had taken something for motion sickness, I was still not feeling GREAT waiting to board the second plane. I had the hint of a cold, that I could tell my body was fighting (and winning) at the time, but when we started to descend from my first plane, the pressure hurt my ears a lot. So getting on the second plane, I was slightly grumpy (getting up at 3:30 to get dressed and finish packing to be at the airport by 5 didn’t help that either), and I get on the second plane just to hear someone a few rows ahead of me playing a movie or tv show at full volume with no headphones. I grumpily pulled out MY headphones and played music I quickly downloaded onto my phone before I had to put my phone in airplane mode, and drifted in and out of sleep. Again, on the descent, my ears felt SO pressurized I was sure I was about to pop an eardrum or something. But finally I was in Nashville, with an hour and a half before my first event, so I called for an Uber to take me to the Omni Hotel, which was where the conference was AND where I was staying.

I went to check into my room and they asked me for a card for incidentals… standard. I start to dig through my purse… my card is NOWHERE to be found. Panic ensues as I realize I got breakfast from the drive-through on my way to the airport and LEFT MY CARD IN MY CAR… back in Peoria. And with no other card to speak of, I was pretty much screwed. I called my bank to see if there was anything I could do. They couldn’t give me my card number. They kept trying to close my account and I said “NO! My Apple Pay is my ONLY form of money right now, if you close the card, I will be stranded.” When I asked for literally any other way, the lady told me “well maybe go find an old lady and ask her for help, old ladies are usually really nice like that.” Um, what? You’re literally asking me to go up to a stranger and say “hi, can you use your credit card to put a $150 hold so I don’t have to sleep on the street tonight?” I might be considering a change in banks after that conversation. With no way to put a card down for incidentals, and the first event happening in about 45 minutes, I headed to the second floor to try to check into the Seminar…I will say right here… this day ends up a lot better, and the whole seminar was not representative of this one moment, but, remember, I’m grumpy, tired, and it looks like I’m going to be sleeping on the street tonight, so I was already not in a great mood. The check-in table was right outside the Ballroom where the Warner Music Nashville Lunch was to be held (the first event) and people were starting to line up to get in there, which was impeding on the long lines to check into the conference. So it was a blobby mess to start with, and then I waited 30 minutes in line, just to get to the front and be told “well we SEE your registration here, but we don’t have anything printed for you!” I wait another 15 minutes, and they still can’t find it (at this point, the lunch had started) so they hand me a ticket to lunch and say they’ll print me another name tag and to come back after lunch. So with my luggage in the midst of THOUSANDS of people, I head into the ballroom. There’s now no place to sit, so I get lunch and eat it standing over my suitcase very un-gracefully.

I forgot to save each individual video, so I just saved the whole story from the Nash Instagram from the WMN Lunch. So I had softened my grumpiness a little because this was pretty awesome!

So after I go back to registration and say “Hey I was told to come back after lunch and they’d have my registration ready for me?” Yeah, cue more scrambling. There was 20 minutes until the first panel, so I was hoping to get my registration and, still with my suitcase, head there. 30 minutes later, I finally received a badge, and had missed the start of the panel, which, ironically, was titled “Time Management: Your Success Depends on it.”

While I was waiting for my registration ONE of the times, my brother had called me, and I asked him a ginormous favor. He said he braced, ready for action, did he need to come pick me up in Charlotte? Did I miss a flight? Did he need to start a trip to Nashville? “I left my card in my car in Peoria, and I need to put something down for incidentals. I SWEAR I won’t trash the room, so it’ll only be a $150 hold, but could you POSSIBLY let me use your card?” He almost laughed. “That’s NOTHING” he said. “Of course.” and rattled off his card number. Saved. My. Freaking. Week. I have the best brother ever. So after I couldn’t make the Time Management session, I headed back downstairs to check into my hotel again, and finally got the keys. I went, still a little grumpy, to my room on the 9th floor of the Omni and upon opening the door, the grump was gone. My view was INCREDIBLE.

I took a deep breath, reorganized my life, and headed back downstairs for the Opening Ceremonies, where I was pointed out as the Rusty Walker Scholar. They also introduced the new inductees into the Country Radio Hall of Fame, including Bobby Denton, who had been a good friend and coworker of my dad’s when HE was in radio, who had unfortunately passed away a few years earlier from cancer. I took a picture of the screen and sent it to my dad. Directly after that, the next session was the Keynote Presentation which talked about a 16-hour documentary broken out into 8 parts to air on PBS later this year about Country Music, by Ken Burns. They showed us clips of each of the 8 parts, and let me tell you right now, you are NOT going to want to miss this one. It will warm your heart, make you cry, and keep you nostalgic. It will absolutely remind you why country music is amazing. I believe that airs in September, so keep it in your mind!

After that, I headed to the hallway for the Welcome Reception, where the Six String Soldiers, a band made up of military service members, and Travis Denning performed!

After that, we were let back into the Ballroom, which had been expertly changed over since the luncheon to a more loung-y type setting, and Amazon Music presented a session they called Country Heat, where King Calaway, HARDY, Adam Hambrick, Tenille Townes, and the Zac Brown Band all performed. At this point I kept bouncing upstairs to my room to grab my charger and sat by a plug because I could NOT have my phone dead for what came next.

After Amazon Heat, the whole crowd shifted downstairs, out the Omni Doors, and headed to Bridgestone Arena (literally across the street) for an Intimate Solo Acoustic Performance with Garth Brooks. It. Was. INCREDIBLE!

We weren’t allowed to take video, only pictures, but it was a very chill session, with Garth taking questions, requests, and remembering his career so far in country music. He is JUST as captivating of a performer acoustically as he is with a full band!

After this, I was beyond exhausted. I had a very long day, and was grumpy for most of it, so I went back to my hotel and slept… eager to see what Day 2 of CRS brought me!