The new line up for the return of 973 River Country!  Peoria’s new Country Leader! 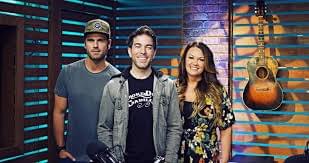 Known for quick wit and approachable demeanor, The Ty Bentli Show is a engaging, high-energy morning show. Wake up inside the world of your favorite country artists! The Ty Bentli Show brings Nashville to YOU – injecting humor and unpredictability into genuine and relatable conversations with listeners and country music’s biggest stars!

TJ recently joined the show, a very lucky mommy to a sassy almost 2 year old and getting married to my best friend this New Year’s Eve! Glitter and champagne anyone?! It takes me way too long to get ready and it’s a daily struggle between wanting to look good in a swimsuit and also wanting to eat an entire loaf of garlic bread. I grew up dancing but quickly learned that’s where my musical talent ended, I can’t sing or play an instrument so I found a way to live out my passion every day in radio.

Plus Country music star & co-host Chuck Wicks, Wicks has proven he’s equally skilled on either side of microphone.  Whether he’s interviewing one of his country music peers during the popular show or delivering a new song from his latest album Turning Point, Wicks has earned respect as an impressive communicator and multi-faceted talent. “The days of being one dimensional are over,” he says with a smile.

I was born in a small town near Birmingham, AL and raised in Florida. And these days, I have a soft spot for Dierks Bentley. Even though I have lived all over the country, home is wherever friends, family, delicious food and awesome music are found. I’m glad to have found a home on the radio with you!

Born in Texas but worked behind the scenes of radio, did a little schooling and before long I became the typical tortured radio intern. Lover of down-to-Earth artists, songs that come from the heart and stories we can relate to.  My butt may be in city for work, but my heart is still all country and I know I’ll end up back there some day. For now, I just prefer less mosquitoes and bears around trying to eat me when I’m drinking a beer while grilling a steak out back.

Smith has carved out her reputation in Country radio, having hosted shows in San Diego, Florida, and on over 100 stations simultaneously on NASH Nights Live, as well as hosting the syndicated weekend show With Elaina, and the award-winning podcast Breaking Thru with Elaina. “Today’s country music genre is young, fresh, and modern, and Nights with Elaina fits the bill perfectly,” said Charles Steinhauer, Chief Operating Officer, Westwood One. “Elaina is a force of nature when it comes to connecting with her listeners and some of the biggest names in entertainment today. She’s ‘always on’ and available to be heard every weekday night, over the weekend, and on-demand with her podcast and socials, making Elaina the quintessential modern broadcast personality.”

Born in Iowa, Wes has known radio for years, and although new to Peoria, already deep in local events, country music and meeting more people from all over Central Illinois. His passion for music, is only second to his love for his 10 year old daughter.

Known as “Doc” since 9th grade baseball season. Got a late start in broadcasting. I spent too many years earning two-thirds of a journalism degree – wanted to be the next great sports writer – before money grabbing and becoming a blue collar guy for a few years. I was 26 by time I cracked a radio mic on air for the first time (“Good morning, Big Rapids!), I team up with former Illini lineman and Peoria Pirates assistant coach, Tony Johnson, to broadcast The Red Zone Game of the Week, high school football each fall. 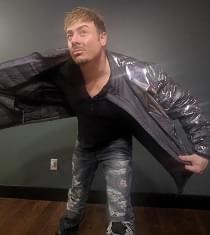 Landed back in the Midwest where he calls home; Central Illinois.  “I admit that I missed pollen, hay fever and sneezing fits when I was down South; and am glad I am back making sure I always have a Kleenex in my pocket again” says Brian. Meeting some great fans right here has been a blast these past 3 years for Brian too. Hobbies include, music, radio, getting married, getting divorced, working, long journey’s on his new motorcycle, staying out until the next morning at night clubs & snuggling with his buddy Joey (that’s his cat).